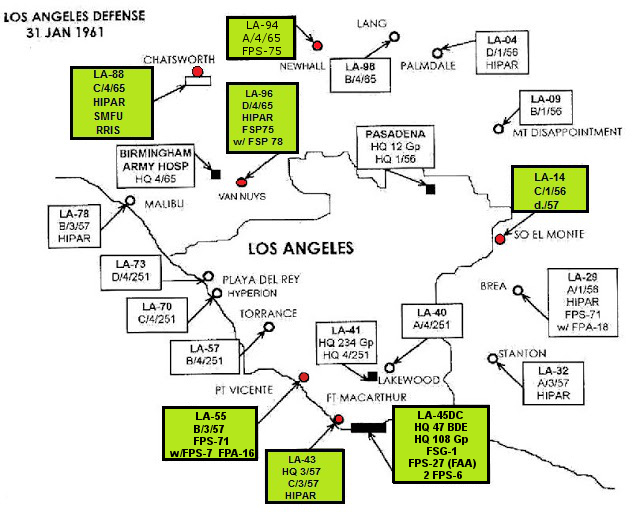 Click on the highlighted boxes for more information about those sites.

Nike Ajax missile at the Fort MacArthur Museum.
Project Nike was a U.S. Army project, proposed in May 1945 by Bell Laboratories, to develop a line-of-sight anti-aircraft missile system. The project delivered the United States' first operational anti-aircraft missile system, the Nike Ajax, in 1953. A great number of the technologies and rocket systems used for developing the Nike Ajax were re-used for a number of functions, many of which were given the "Nike" name (after the goddess of victory). The missile's first-stage booster became the basis for many types of rocket including the Nike Hercules missile.

Nike Hercules missile.
Even as Nike Ajax was being tested, work started on Nike-B, later renamed Nike Hercules (MIM-14). With improved speed, range and accuracy, the Nike-Hercules missile could intercept fleets of bombers. The Hercules had a range of about 100 miles (160 km), using four of the Nike Ajax boosters working together.  The missile also had an optional nuclear warhead to improve defense against squads of aircraft. The W-31 warhead had four variants offering 2, 10, 20 and 30 kiloton yields.

In order to guide these missiles, a dual radar system was established to track threats and adjust the trajectory of the missile.  One radar followed the target, and the other tracked the missile.  A small team consisting of only a handful of technicians could monitor changes in order to ensure the two make contact.  The short film entitled The Nike Hercules Story, produced by the U.S. Army, attempts to reassure citizens of the systems accuracy and effectiveness as  a defensive measure by explaining its development and use.
Between 1956 and 1974, before most of the Nike sites were closed as the result of the START ONE treaty between between the U.S. and the U.S.S.R, those living in Los Angeles had little idea that they were surrounded by numerous nuclear warheads.  Of the 240 national Nike missile sites, Los Angeles accounted for 16 launch sites, as well as radar and control sites.  Each of the launch sites was equipped with a number of Ajax and Hercules missiles.
Click here to see a map of COLD WAR SIRENS in L.A.

If you or anyone you know worked at a Nike Missile site in the Los Angeles area, please share your stories by contacting us as coldwarexhibits@gmail.com!